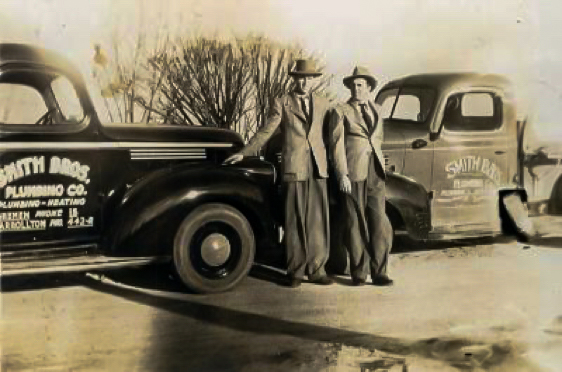 Born in Bremen, GA, Roy and George Smith moved to Atlanta and apprenticed to the plumbing trade in the 1930's. By 1940, both Roy and George were Master Plumbers, but soon found themselves in Charleston, SC, installing plumbing into the massive war ships for World War II being constructed at the Charleston Naval Yard.

Back from the war in 1945, Roy and George decided to open Smith Brothers Plumbing Company in Bremen, GA. By 1950 the Smith brothers had succeeded in providing indoor plumbing to the majority of the farms around Bremen/Buchanan, Georgia and their business continued to prosper.

In 1963, George Smith's son Jack Smith and his wife moved to Marietta to facilitate Jack's desire to complete his college studies, while also working at Lockheed Aircraft. Jack's father George passed away suddenly in 1972, and Jack left Lockheed to assist in running the plumbing company along with his brother-in-law Gerald Laminack, renaming the company Sundance Plumbing. After selling the company to a national firm in the late 90's, Jack re-opened as Sundial Plumbing, and Jack's daughter Mitzi entered the business. Working with her father, Mitzi became an accomplished licensed Master Plumber herself and continued to run the business after her father retired in 2009.

Today, Sundial Plumbing is proud to carry on this legacy of trust and is consistently recognized for its award-winning service excellence. The Smith Family has been dedicated to providing the highest quality plumbing materials and workmanship for over 70 years and across three generations. That dedication continues today under the leadership of Bruce Phillips, President of Sundial Plumbing.

A+ rating as of